The beaches, the forests, the sea, the blue sky … there are many things that make Ibiza a unique place. And, in fact, you cannot talk about Ibiza without mentioning the traditional gastronomy of Ibiza.  A day at the beach is not the same without a paella after a dip or a bullit after those hours of sun.

The gastronomy of Ibiza: Main dishes

Traditionally, fish, seafood and meat have been the most common products in Ibizan cuisine. We find it in the star dishes: the paella and the bullit.

The seafood paella with its saffron color.

The paella admits certain varieties from seafood to meat.  Despite it, the most common is the mixed one that combines seafood with meat. A good white wine from the island makes this rice a unique delicacy. The bullit de peix, on the other hand, is a mix of boiled fish and potato that is sometimes accompanied by an aioli sauce. Because there was a shortage in the past, the leftover broth was used to complete the meal with a rice and so it continues to be served. 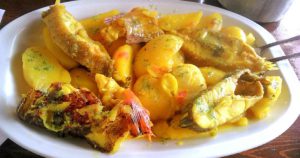 The bullit de peix is a star dish.

The sofrit pagès is perhaps less known among tourists than the paella and the bullit but it is also part of the typical dishes of the gastronomy of Ibiza. It is a combination of potatoes, meat, and pieces of vegetables of the season. I assure you that he invites you to cut the bread until the pan is clean! 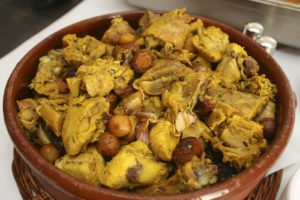 The sofrit pagés is typical of autumn and winter.

The gastronomy of Ibiza: Desserts

After a good main course, the gastronomy of Ibiza also has its sweet stars. The greixonera, the flaó, and the orelletas are the most famous.

Greixonera was prepared the dried ensaimadas that were of previous days, milk and lemon. The result is consistent custard. It is almost mandatory to have tried this dessert during your stay in Ibiza. 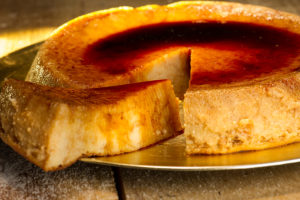 The flaó is prepared from goat cheese and mixed with mint. For those who are lovers of cheese, this will be the dessert par excellence. 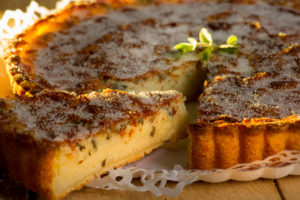 Orelletas were usually prepared only during Easter but can be found in traditional ovens throughout the year. It is a type of cake with a touch of lemon with a characteristic shape of a raindrop.

The gastronomy of Ibiza: drinks

Before we mentioned that the paella had to be accompanied by a white wine from the land to be a good example of the gastronomy of Ibiza. Well, although the white is also produced in Ibiza, the most typical is red pages wine. This one has a strong flavor and strong consequences – wink.

Hierbas, the most typical liquor produced in Ibiza, is also served as an aperitif or dessert and is made on the basis of anise. The thousand and one herbs that rest in it during months endow it with its peculiar forest flavor. 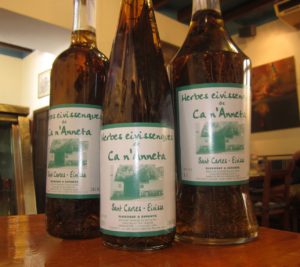 None of the commercial brands can be compared to those prepared in the bar Ca n’Anneta in San Carlos .

Lastly, I would not want to end this entry without mentioning Café Caleta. This variety of coffee was invented by a fisher from Sa Caleta (hence its name) and is a mixture of coffee, cognac, lemon, orange, and cinnamon. Of course, each house has its secret and will never know the same in one restaurant as in another.

The gastronomy of Ibiza has a wide range of dishes, as we have seen, and for every taste, there is a star dish. Both lovers of meat, such as fish or sweet, will find in their variety a dish that they will always remember.

And why not taste them based on the recommendations of the S’Argamassa Palace team? I mean them because there is nothing like traveling through a land through the eyes of its residents.