The summer solstice comes every year accompanied by dreams, legends, and good luck. After the night of San Juan on June 23, we have thought about the different legends that touch the magical island of Ibiza. The fire and the sea play a decisive role in each of the stories that give this white island a mystical character.

The night of San Juan: myths and rituals

Every June 23, each village collects a pile of firewood to set it on fire around midnight. San Juan is the homonymous town of the festival and center of these fires. There, small bonfires are prepared that have to be skipped to have a whole year of good luck. However, not only does the fire skip during the night of San Juan. Also jumping the waves of the sea can bring the best of luck. The trick in both cases is to jump an odd number of times over bonfires or waves.

The bonfires are lit in a row so that the race of luck passes over them.

It is also the night in which it is necessary to go for a walk along the Santa Eulalia River. It is said that a small plant, future fameliar, will be born near the river. Whoever is lucky enough to find the plant and could take it, will see that little gnome grow. It must be said that he only wants “work or food”. Worker as his fame precedes him, it is said that this figure is very fast with all the tasks entrusted to him. There is no harm that does not come well because the fameliar gets bored quickly when he has no work. Then, he quickly looks for something to eat. Once he has tasted the food, he will never stop eating until he leaves the owners with the empty storeroom.

As a detail, the S’Argamassa Palace is only about 20 minutes by car from the town of San Juan. 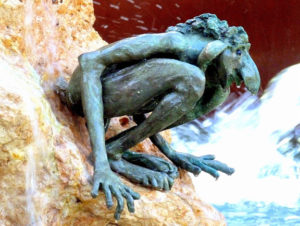 The night of San Juan: a feeling of community

This celebration is special for all the people of the island. Thus, the solstice night is used to celebrate the arrival of summer. Being part of the island means feeling deep inside all the traditions that root the spirit in this red earth. It seems that the world stands before the fires. There, and for a few moments, the fire gives heat not only to the skin but also to the soul. It seems that the essence of the bonfire, which accompanies the human being since its remote times in caverns, has not been lost. In the beginning, the bonfires were the meeting point and feel in community, something that does not seem to have changed much.

In the year 2011, there was the great fire of Morna that destroyed 1500 hectares of forest north of the island at the end of May. During that year and later, the fires that were made during the festivities of the night of San Juan were vetoed. Those who lived through the catastrophe of that 2011 still remember each year as the flames engulfed kilometers of forest. Many residents still feel a chill as they remember it while they celebrate, with some melancholy pain between the ribs, the night of San Juan. 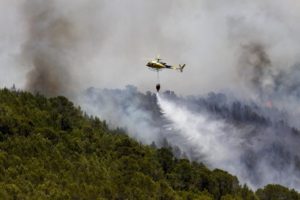 Helicopter flying over the ferocious flames in the fire of Morna.