September and October are ideal months to visit Formentera. Temperatures drop slightly and sky and sea gain color. In addition, the prices of the ferry companies and rentals go down, as well as the amount of people who visit the island. Those looking for tranquility will find during these months the perfect time to get to know the sister island of Ibiza.

What to see in Formentera: nice beaches

With just 83 square kilometers, Formentera sports treasures in each of its corners. Some of them, on which all the tourist guides agree, are the following.

The beach of Ses Illetes is, without a doubt, the best known of all. In the middle of the Natural Park of Ses Salines, this beach has incomparable crystal clear waters. It is the stopping point of all yachts and nautical fans.

However, it is not a family beach. The reason: the high prices and the limited gastronomic offer for the little ones in their beach bars and restaurants. It is a beach dedicated to extreme luxury, a trend that has been flooding the two islands for a few years. 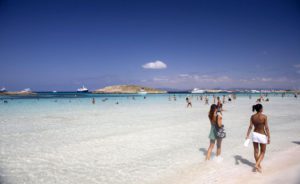 Ses Illetes has incomparable crystal clear waters. Yachts are indivisible in their image during the summer months.

On the contrary, we found beaches that are Family Friendly. We are talking about the whole of Es Caló and the immense Platja de Migjorn. The first is divided into small sandy areas separated by rocky sections; the second is a kilometric beach of sand.

Es Caló is oriented to the north, Migjorn to the south. A short road joins them, so if the sea is rough, it is ideal to be able to change to the other where we will surely find calmer waters. 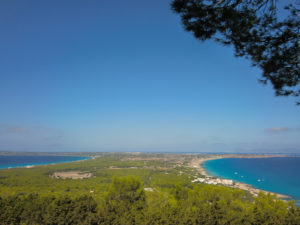 The image is taken from El Mirador de Formentera. The left is the beach of Migjorn, on the right the set of coves of Es Caló.

What to see in Formentera: Its famous lighthouses

El Faro of Cap de Barbaria is also a must. The access with vehicles has been restricted a couple of years ago, so you should leave the car about 2km from the lighthouse and walk. This measure was taken to eliminate the saturation of vehicles suffered by the area.

Famous for being featured in the Spanish film Lucía y el Sexo, the lighthouse is one of the most modern of the islands. Below it is a small cave which is accessed through a hole. The cave gives infinite views to the sea. In front of that landscape, there are no words needed. 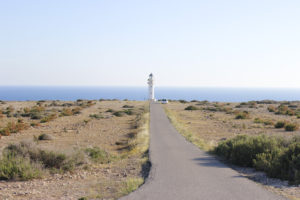 The most famous image of the Barbaria Lighthouse. The road leads directly to it.

Another one of the lighthouses of must visit is the Lighthouse of La Mola. The highest point of the island is formed by a plateau crowned by this guide light.

I recommend this lighthouse personally, as it is priceless to eat with your feet hanging down the cliff while looking at the sea. The immensity of the blue of the sea and the sky reminds us of how small we are, and how great is the magic of nature. 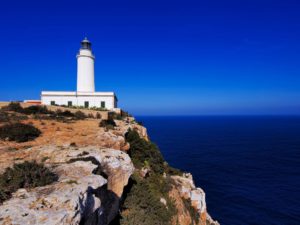 The lighthouse of La Mola crowns the cliffs.

How to get to Formentera from the S’Argamassa Palace

A ferry connects Cala Pada directly with Formentera. It is a perfect option for those who do not want to go to Ibiza first. The trip is about an hour and a half.

Another option is to take the ferry from the port of Ibiza town. These ferries take about half an hour to get to Formentera and offer many times both roundtrip and return. Whoever wants this option must first go to the city.

Both of one option and the other, you can buy tickets at the reception of S’Argamassa Palace. More comfortable, impossible.