The hippies of Ibiza were young educated people

The hippy movement began in Ibiza in the 60s. Young people from all parts of Europe and North America were fleeing the situation in their countries after the Second World War. Discontent with the society and politics of their countries, they looked for quiet places, far from being overcrowded. These young people were children of wealthy families, scholars, and cults that sought a cosmopolitan and bohemian atmosphere. 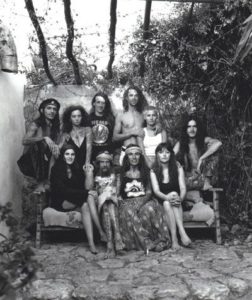 In Ibiza people from all over the world gathered.

Driven by this feeling of indignation and rebellion, more and more hippies began to arrive on the island. The influx of people from all over the globe caught the attention of great artists of the time. It was as well as Ibiza began to gain the reputation and be known all over the world.

The Ibizan people lived with them kindly and were fascinated by those colorful clothes they wore. In addition, another feature that attracted them to hippies was their beauty. They considered them very handsome and beautiful. The nickname that was earned by the local people is “peluts” (hairy) for the long manes they wore. 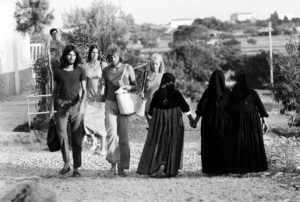 Locals coexisted nicely with the hippies.

The hippy markets of Ibiza

In those 60s, hippies congregated to sell crafts. This was how in Punta Arabí first and then in Las Dalias, the custom of the markets that we now know began to take shape.

However, the markets now have little to do with those of before. However, you can still find certain traits that remind you of your beginnings. Certain artisans and stalls have not lost their essence and visiting them seem a journey in time. 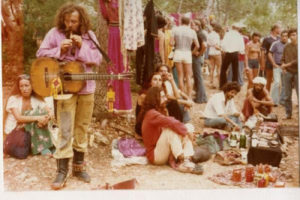 A color photograph of one of the first flea markets.

The visit to one or several hippie markets is mandatory during the stay in Ibiza. Every tourist guide recommends it and, to be honest, whoever has never seen it will be speechless. During the days of the market, not only artisan stalls are usually prepared, but also live music, performances, meals, drinks …

Finally and for your information, the two most important hippie markets on the island, Las Dalias, and Punta Arabí are only 7km and 3km from S’Argamassa Palace. You could say that the hotel is right in the middle of what was a cultural revolution almost 60 years ago. 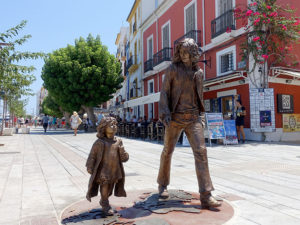 Monument of the sculptor Ció Abellí, a replica of the mythical photograph taken by Toni Riera in 1972. It is located on the promenade of the port of Eivissa.