Beyond the beautiful beaches, picturesque landscapes and excellent gastronomy, Ibiza shines for thousands of years of culture. After all, it has been trampled upon by various civilizations, leaving their particular imprint on the island. The culture of Ibiza is thus a legacy of customs and forms of life very diverse among them.

The Punic necropolis is considered the most important of the western Mediterranean. In addition, the large number of graves and their good state of conservation make it a compulsory cultural visit.

From the 7th century BC., the Phoenicians buried the dead in their “city of the dead”. Today many sculptures and tombs are preserved that allow us to go back in time to understand how lived one of the civilizations that most have influenced the island. 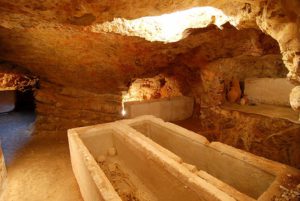 The necropolis is located at the foot of the old town of Ibiza and opens in the mornings and afternoons. The visit to the Puig des Molins Museum rounds off the Phoenician cultural route.

Important walls in the culture of Ibiza: churches, forts, and cathedrals

The churches that stand out are Santa Eulària del Riu, Sant Miquel de Balançat and Es Cubells. The first two are situated on the top of the respective villages and offer beautiful views of the surrounding area. Its construction in elevated points served exclusively to the defense and even nowadays raises its imposing face before the visitors.

Es Cubells, a remote town in the south, is built on a cliff. Its small church of the twentieth century is one of the newest, nevertheless, it maintains the beautiful architecture characteristic of the culture of Ibiza. 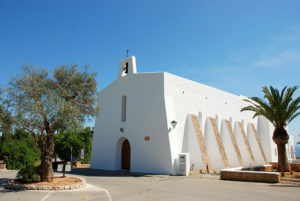 Of course, the old town that I mentioned before is also worth a visit.

In 1999 it was declared World Heritage by UNESCO but already in century XVI, the impressive walls were protecting the town. The walk through the ancient Muslim city leads to several museums, which include the Museum of Contemporary Art and the Archaeological Museum.

From the various ramparts, you can enjoy spectacular views of the port and the city of Ibiza, as well as Formentera.

And finally, if I told you about the churches before, I can not conclude the section without mentioning the cathedral of Dalt Vila. Built in the 13th century, it is the seat of the archbishopric and watchman of the ancient walls. 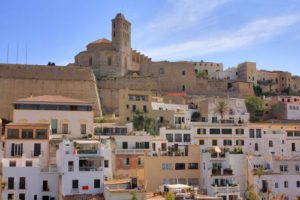 The cathedral, which watches down to the old town.

In 1973 and 1986 the Hippy Market markets of Punta Arabí and Las Dalias were started, respectively. The hippies who settled on the island in the 60 began shortly after these points of encounter, which not only implied the exchange of goods but above all a meeting point of spirit, music, and peace.

That atmosphere is still alive today several days of the week and is without a doubt another of the most important cultural visits. As you see, the culture of Ibiza is capable of surprising all kinds of interests.

A single post isn’t enough to describe all the cultural wealth of the island. However, it is a good start. Of course, you can always complement it with the personal recommendations of the S’Argamassa Palace team.